NZ continues to trend towards greater ethnic and religious diversity.  Significant Chinese, Indian, Korean and Filipino communities bear witness to this fact. Many overcome huge hurdles and show enormous courage to get here.  Pause for a moment and think what it might feel like to make NZ home.

How can we relate to people of different backgrounds?  If we’re honest, often we’re as uncertain as they are.  This article focuses on Hindus, predominantly from India, but many of the principles apply in making any cross cultural connection.

In the 2013 census, “Asian” was the third largest ethnic grouping.  India replaced Australia as the third most common country of birth.  People affiliated with Hinduism increased 40% to 90,000, and Indians are up 48% to 155,000 – only marginally behind the Chinese.  The number of Sikhs has more than doubled since 2008 too.  Unsurprisingly, Hindi has officially become the third most spoken language behind English and Samoan.

Compare this to people identifying as Muslim, which increased 28% percent to 46,000.  A recent NZ Herald article showed Auckland alone has 17 Hindu temples. The latest one in Swanson Road is the largest in Australasia, its marble imported from India.  Two priests and their families have come from India and live next door.

Are these Indian people Hindu, Sikh, Jain, Parsee, Muslim, or Christian?  Are they from North India, Punjab, the North East, South, Fiji or elsewhere?  India has many different and distinct communities. Cross cultural bridge building likewise takes many forms, requiring an attitude of mutual learning.

Meals are an excellent way to get to know people.  Great conversations can happen around food.  In Indian culture, it’s polite to remove shoes and be offered water or a cup of tea upon arrival.

When Hindu friends visit, it’s good manners to wash hands before and after a meal.  Food may be eaten with a spoon or fork, or with the right hand (never the left).  It’s best to offer vegetarian food.  Definitely don’t serve beef, as cows are considered sacred.  Ensure there’s some spicy chilli sauce, and traditionally serve the guests and older males first.

Food left on the plate isn’t a sign the meal isn’t liked.  It means the food is good and the guest is satisfied.  A guest may take only a small portion of each dish on offer.  Don’t be shy though to press guests three times to have a second helping.  This signals that the host means it, and the guest’s refusal indicates they’re not greedy. Drinking alcohol is not usually part of an Indian meal or culture. 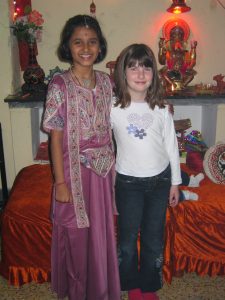 Sharing faith with a Hindu or Sikh

Hinduism sees unity in diversity and is very accommodating.  Because many Hindus don’t have a problem accepting Jesus as one of many incarnations of god, be clear how you present Christ. Ensure you have mutual understanding of any terms like sin or heaven, and try to use their terms where possible.

Authenticity is valued, so relax and share your testimony and faith with honesty, humility and confidence.  Because Hindus are spiritual people who desire to experience God’s power and peace, we can naturally speak of God’s involvement in our lives, being fully convinced of the truth upon which we stand.  As many live in constant fear of magic, witchcraft, and evil spirits, we can also offer to pray whenever it’s appropriate.

Hindus, and Sikhs especially, have great respect for the sacred writings of different faiths, and will generally listen attentively.  Don’t put the Bible on the floor or write in it.  Encourage them to read it for themselves rather than quoting scripture to them.  The quality of Christ’s relationships with people, his teachings (particularly the Sermon on the Mount), and his self-sacrifice and suffering particularly appeal to the Hindu.

Hinduism teaches that karma (the results of actions in the past life) causes samsara (endless cycles of births, deaths and rebirths).  Consequently, Hindus have no assurance that they can break this cycle. Show that in Christ we can have freedom from sin and an assurance of salvation.

The goal of salvation as “eternal life” is unlikely to communicate effectively.  Prayerfully search the Scriptures for keys to present the gospel message.  Examples of Christ bringing peace, healing, and forgiveness in the present life often connect well.  Other important examples include Jesus demonstrating his power over nature (Mark 4-5), evil and death itself.

Where To From Here

Hearing the gospel often over a period of time is usually required before someone responds.  Remember though, that for Hindus to leave their community they must find alternative relationships with their new brothers and sisters.  We must be prepared to become family and friends to new believers, and this means more than having a cup of tea together after the Sunday service.  As Jesus followers we must help Indians become a vital part of a Christian community.

Genuine caring speaks for itself, and often becomes the strongest bridge between people of any background.  While not exhaustive, hopefully we’ve given you some helpful hints to begin making cross-cultural connections!