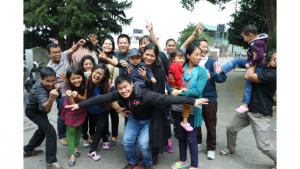 Northeast India comprises of Seven Sister States.  Welsh missionaries first arrived in the state of Mizoram in 1840. By 2006, 80% of the state’s population were Christians.  Missionaries from Mizoram are now missionaries in Wales!

Operation World notes that, ‘recent awakenings and revivals have dynamised the church and society.’ Over 2000 missionaries have been raised up, and Mizoram stands amongst the most literate and well educated states in India.

Neighbouring Meghalaya, known as ‘Scotland of the East,’ likewise experienced great revivals in the early 20th and 21st centuries. In 2007 the Presbyterian Synod, sensing a ‘Welsh Gospel debt’, decided to regularly pray for revival to break out in Wales, as it had in Shillong, it’s capital city.

WEC’s story begins in 1946, when two single women arrived in Shillong. Their plan was stay for six months of Nepali language study, before pushing on into Nepal for pioneer church planting.  They stayed 32 years! Upon arrival there was no known church amongst the Nepalis. Neither did anyone expect them to be able to plant one, in such a male dominated society. Yet in 1947, the first Nepali church was formed in Shillong. Today there is a strong Nepali church, and many fervent Indian Christian leaders across India, as a direct result of these little known, faith-filled women.

Building on this legacy, a WEC IMM team recently ran its first missionary orientation programme in Shillong. Fourteen ‘candidates’ participated from around N.E. India. Kiwis John and Alison supervised the residential course. This is what two of the participants said.

“75% of our province profess to be Christian.  This is wonderful! However, only 30 missionaries have been sent from our many churches. Mizoram state has sent over 2000. Imagine if this could be repeated across the other states. There is still huge recruitment potential!” La’s church is now supporting her at Asha Bhawan, a drug rehab ministry of WEC.

Ching recalls, “Whilst pursuing a Commerce degree in 2003, I was praying for mission work by following a small prayer book. God used the statistics to prick my heart so strong that I couldn’t sleep that night.  I knew I was being called, but I brushed it aside and in my foolishness bargained with God. Again, this time during a church sermon, God’s word hit me so strong that I could resist no longer. Now I’m training to go to Laos with WEC.”

This is only a snapshot of N.E. India. There’s a plethora of opinion on what mission involvement in India should look like. WEC’s IMM Branch is one model that seems to both build on the past and provide an effective way forward.