In August 2005 Hurricane Katrina struck the Gulf Coast of the United States.  It would become one of the deadliest and costliest natural disasters in America’s history.  Several hours away, Hamilton pastor Campbell Forlong had just arrived in Texas for a four-month sabbatical.  Little did he know how God would use this tragedy to shape him, his family and the church they led. 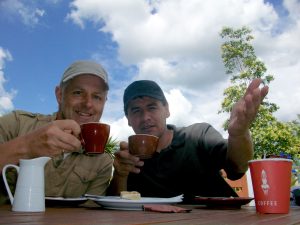 The Beginnings of a Migrant Ministry

When Katrina hit, the Forlong’s host Texas church was immediately thrown into action. Struck by the devastation and personal interaction with internally displaced people, God challenged Campbell, and later City Bible Church (CBC), with the question, “What do we value?”  He notes, “At a time when values weren’t really being discussed or trendy, I was wrestling with what it was to have a values-based life and entity. I wrote home to the elders and asked, ‘What it would look like to shape our church community primarily around our values; not our vision, purpose or activities?” Together they began to look afresh at the core of God’s character, and settled upon six values – one of which was compassion for the needy.  This formed the foundation for what is now becoming a multifaceted refugee and migrant ministry.

Stage One was to help members “Discover” each value, mining the Scriptures to see its truth.  Stage Two was to “Experience” each value; to identify pathways where people could actually go and serve in an environment.  Stage Three was to “Live Out” the value, where it literally becomes a normal part of one’s life and identity.

CBC established Café Agora on the church’s roadfront in 2008.  When disaster hit in Haiti, CBC decided to use 50c from every cup sold for World Vision work in Haiti, and so a missional business took shape. They’ve continued to support a different charity every month since, the first one being sponsorship of an event for Waikato Refugee Services (now Red Cross).

God continued to introduce the refugee world to them in a variety of ways.  Invited to a powhiri at the local refugee centre, Campbell prayed, “God, if you want me to form a new friendship with someone from a different land, I’m open.” He soon found himself beside Abelardo, a Colombian refugee. A stilted conversation began, and seven years and many coffees later he and his family remain close friends.  Abelardo introduced him to others in the Colombian community, and things quickly developed into family gatherings, social events, spiritual retreats, Christmas Fiestas, conversational English help and Spanish translation for enquirers.

Around this time Victoria, a Colombian undergoing English and mission training at Eastwest College, heard of and made contact with CBC.  One thing led to another, and now Victoria leads the migrant ministry as a WEC missionary on staff at CBC – and so began Converse, a conversational English class (see article alongside).

While many ethnicities now attend Converse, its Colombian beginnings have also birthed a Spanish speaking faith community.  Alongside monthly outreach services and live headset translation during weekly CBC services, all correspondence with them is translated into Spanish.

Challenges Along the Way

As always, close interconnected relationships are key.  Yet many Christians are not confident enough to develop these relationships.  “This is the new area needing development,” says Campbell, “to equip more people to open their homes, hearts and mouths to actually be able to share, to multiply the effectiveness that a few are doing with a few.” Even for the fully committed CBC’ers, who join with regular volunteers from WEC, Eastwest College, and rotating CBC Life Groups, this has been a challenge.

“To allow your home to become multicultural is a big deal.” says Campbell.  “The cross-cultural relationship demands a great deal more than what we’re used to, or than our family can manage. Our church culture also needs to be open to and valuing the diversity of culture, yet this invades our comfort as Kiwis in a big way.”

Such engagement is often costly. Some have been “burned” by experiencing ungratefulness in the face of generosity, even having things stolen from their home.  CBC leadership has also fielded internal criticism. Despite the reality checks however, they remain committed to a value which the majority have embraced. Last year the vision statement for the church was rewritten to be, “To become a growing multicultural community, who love God, love each other, and love the lost.”

What does it mean to become a multicultural community? “Because every culture has its own baggage,” says Campbell, “it’s not about us assimilating another culture into ours or vice versa. Neither is it about add-ons or extensions.  It’s about us collectively becoming something new.”

Fortunately, intentionality doesn’t demand hurriedness. Another CBC leadership mantra is “slow grow”- being in it for the long haul.  The challenge is to get a critical mass involved, which involves the devotion of more human resources, particularly young adults who more naturally transition into becoming “lifestylers of multiculturalism.”

A Word to NZ Churches

CBC isn’t a unique scenario with unique resources.  The following is what Campbell would say to other NZ churches. 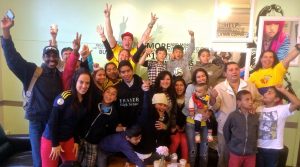 “There’s a huge societal benefit from migration. NZ has long had multicultural elements, but it’s as if we now have an opportunity to journey towards being a community that truly does value one another in diversity.  The NZ church should not only embrace this opportunity but be leading the way!”

“Theologically this is what we should be doing anyway.  It’s God’s idea from Babel to Acts to Revelation, and along the way we get to distill the essentials of our faith, to rediscover truth.”

“One unexpected by-product for us was to see how it meshes into so much more of what we’re about.  We’ve always been a church with mission connections overseas. But it’s as if mission makes even more sense now.  Our overseas partnerships and initiatives seem to fit more naturally now that we have a local multicultural ministry.”

“So often we need to go far, to better understand near.  But let’s not wait for the next mission trip to pray the mission prayers. Let’s start now.  Let’s start near, praying for our workplaces and neighbours here. Let’s work together to help people take courageous steps, to mobilise the body to reach the last, the least, and the lost.”